You may of course ask what was so revolutionary about the mythical Anatolian psychedelic rock, but the same question could be directed to English folk rock or celtic rock.

Umut Adan born in Istanbul, Turkey at 1973. After finishing his education at Italian High School, he went to Italy for his undergraduate degree in political sciences. While studying he held the front man position for many psychedelic bands. In 2009, he released his first 7” single (Gülerler Bize/Beni Seçtiğin Bu Yerde) which got good reviews by music authorities like The Wire Magazine which said that “Very cool debut by a Turkish underground guy who seems to have fully absorbed the nearly forgotten lessons 1970s Anadolu rock scene”. Moment he saw The Wire Magazine article he knew that he was on the right track and he was determine to do whatever takes to be the true artist who will carry the Anatolian legacy which he grew on.

Album “Bahar” recording of Umut Adan’s first long play has began with an offer made by Grammy Award winner producer Liam Watson who recorded The White Stripe’s Elephant which contains their well know song ‘Seven Nation Army’. The album’s recording has been made in his studio Toe Rag Studios in London. Album produced with vintage instruments and whole analog system that gives the vibe of 60’s and 70’s which Umut’s music gets its soul from. This is an offer that only been made one other Turkish musician, Erkin Koray and never been made before ever since. Also for creating archival material, great art archivist Elio Montanari (who photographed Pink Floyd, Marina Abramovic, Anselm Keifer, Joseph Beuys, Maurizio Cattelan, Umberte Eco and much more) was present during the recording. The album is almost ready to publish and it search for its right home to get published.

Umut Adan is a musician, political scientist and trilingual. He currently lives in Istanbul and he is determined to carry the Anatolian legacy. 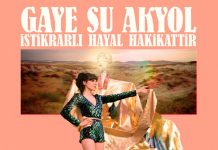