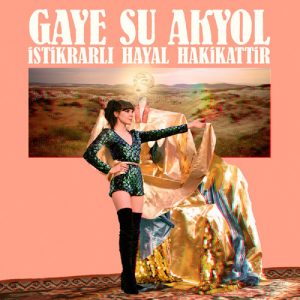 With the release of her first international album “Hologram Ĭmparatorluğu” (2016), Gaye Su Akyol established herself as one of Turkey’s most compelling young voices and most exhilarating sonic explorers. Her work as a singer-songwriter, producer and audio/visual conceptualist, simultaneously navigates the storied past, the hyper-connected present and the unscripted future.

Growing up in cosmopolitan Istanbul listening to Anatolian music icon Selda Bağcan and Kurt Cobain in equal measure, Akyol skipped right over the tired Oriental/Occidental paradigmatic clichés. Gaye’s music was global in concept and local in spirit and nuance right from the very beginning.

Following the widespread critical acclaim for “Hologram Ĭmparatorluğu” Gaye and her sublime band spent 18 months travelling up and down Turkey, Europe and the Middle and Far East sharing with audiences a vibrant mix of raki laced traditional balladry, futurist surf and post-punk opposition. The new album, produced by her and guitarist Ali Güçlü Şimşek, is arguably more immediate and visceral than the first two, reflecting her and the band’s growing reputation as a powerful live act.

“Istikrarlı Hayal Hakikattir,” which translates as “Consistent Fantasy is Reality,” is a deeply poetic album; an album of personalized politics, an album that digs into the heart our contentious, inexplicable contemporary experience. Never blinking. Always dreaming. Never giving in. Never giving up.

Play that song, play the vinyl, Let the storm turn around.  Istikrarlı Hayal Hakikattir (Consistent Fantasy Is Reality): An artist statement  “Consistent Fantasy is Reality” is the third album in my discography. Just like the previous two it is a completely independent and liberated album that embraces a “DIY” philosophy, and a revolutionary album which no capitalist or top-down imposed obligations can restrain or contaminate.

Like my second album it is published by our own record company in Turkey and by Glitterbeat worldwide.  In terms of its philosophy, lyrics, music and motto, this album is the dream of pure freedom, of showing the courage to be yourself, of looking at the culture I was born into without alienation, a “dreaming practice” propounded into a country and world that is increasingly turning inward and becoming a conservatized prison.

Musically the album combines influences from the Anatolian Pop/Anatolian Rock genre that emerged in Turkey during the 60s and the 70s with Turkish classical music scales and vocal aesthetics, and various subgenres of Rock, bringing together strong ballads, Turkish folk tunes, the conventional guitar-bass-drums trio and percussions, joined by violin, oud, cumbush, and – as new additions that the previous albums did not have – baglama (Turkish native instrument), electronic beats and wind instruments like saxophone and trumpet, together making up a very rich instrumental palette. 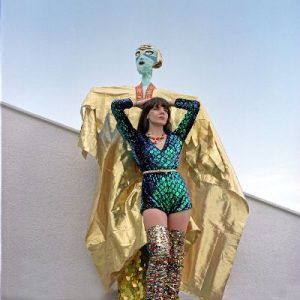 With this album I pursued new sounds in the deep waters of this geography, dug up the manifestation of my experiences, all the music, the people, the pain, the dreams and countries I have heard and was touched by, followed the footsteps of a personal archeology and tried to add my lost territories to these. As in my previous albums I wrote all the music and lyrics, except for one song. I was involved in all stages of production, arrangement and recording as co-producer, and in the visual language and graphics of the album as the art director. Although I did not try to emphasize this aspect in regards to my previous albums, I came to be fully convinced that the existence and power of women needs to be specifically pointed out in a world that is becoming almost caricaturized with masculine displays of power, where everyone except whoever is holding power is deemed invisible. As a woman born and raised in Turkey, who makes her own music, who created a playground outside the masculine system by founding her own record company, who participates in every stage of this work from creation to production in a masculine dominated geography and an ever conservatized world, I think it is necessary to make these stories of “consistent dreaming” visible and I hope to inspire other women and people who are producing and claiming their own dreams. In this sense this is an extremely feminist, revolutionary and idealist album.

About the name and the content of the album; there are two important facts, the first one being the physical reality:  In a difficult country like Turkey, bordering the Middle East, Europe and Russia, in an atmosphere that is increasingly conservative and in a world that contributes to this darkness with its own chaos and power struggles, I believe that we need to create a counter reality in order to challenge organized evil and the horrible reality it creates, and the strongest option here is “consistent dreaming”.

And the other fact is a personal awakening:  The materialist world view attributes supreme meanings and values to the confirmable, accumulated world that it calls “real,” while almost ignoring the enormous power, amazing nature and value of dreams. My superpower as a child was dreaming (almost like the other children) and although I nearly forgot it for a while, I remembered my real power eventually. There is nothing as spectacular and beautiful as a free mind… As soon as I realized that the only difference between dreams and reality was “consistency” in my mind, the universe became a better place. This is where this album is coming from.

On the cover of the album, there is a “fantasy world” that promises whatever you fantasize constantly becomes your reality. We designed a “non-existent creature in any culture” with a majestic, glittered body and with a holy light on its head that symbolizes that the dreams of the individual are one’s holy key to open the new chapters in life.

On the back of the cover there is an ancient motif called “eli belinde” from Anatolian culture.  Eli belinde (Turkish for “hands on hips”) is a motif of a hands-on-hips female figure. It is widely used on kilims. It is a “matriarchal symbol” that symbolizes feminine power, wealth, fertility, good fortune, happiness…etc. But in this case, the reasons to put it on the back cover are the feminine power she carries and the polysemous structure of the word “fertilization” which I take to mean “the fertility of a free mind and fruitfulness of dreaming.”

We are masses moving within a huge chaos. We are the disaster seeds of a cultural collapse which infiltrates the human mind and inhibits dreams. In an age when we are forced to forget dreaming, as societies we become weak signals of the barren mind. We are descendants of unqualified herds that follow grunts. We are the miserable, standardized, un-rebellious and unfounded robots of the new world.

What could be the one thing that could separate us from this herd, these masses, these crises of ambition ground down by the things we memorize?

This album is in search of the great crisis of existence, the assorted peculiarities that you are subjected to when you refuse to get used to and are alienated by things such as war, or death, a sudden separation forever from a loved one, dreams for instance, the nature of species, what we look for in this weird planet, what we are not able to find, what we call real and what we turn down as dreams.

Dreams keep you awake and it is time to wake up!