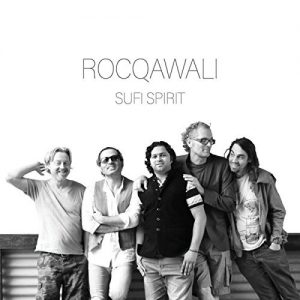 At first glance, Pakistani devotional music (qawali) and rock and roll couldn’t seem stranger bedfellows. Yet as Sufi Spirit elects, the two traditions share a deep honesty that marries sublime. The band’s drummer Stephan Grabowski attributes this to the ‘raw guts’ at the heart of both music’s. Citing early Johnny Cash’s gruesome laments and darkened ballads, Grabowski draws parallel with qawali music’s blazingly honest love songs to the divine. There is too a transcendental urge shared in both; line up thrashing rock and roll guitar and heavy drums with qawali’s impassioned vocal improvisation, driving percussion and rising handclaps and you find two genres’ indubitably united in search of ecstasy. 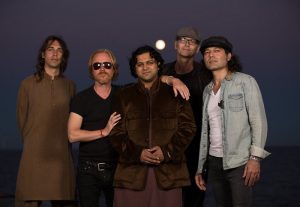 This idea of eliciting a transcendent state through music seams right through the marrow of Rocqawali’s musical bones. Sufi Spirit was recorded over seven days in a Danish studio. The sessions were recorded live and centred on long, meditative jams from which the arrangements presented on this album were organically born.

Stephan explains the band’s honouring of improvisational approach in relation to qawali practice. In the Islamic Sufi tradition music is seen as a gateway to the divine, a tool by which to enter a spiritual plane closer to God. As such strict arrangements or locked melodic patterns are not performed, rather exploratory astral journeys are accessed via instinctive improvisation and skilled manipulation of form and feel. Head-banging groove ‘Alaap’ illustrates the point well, a down and dirty rendering of pure improvisation. Insistent off-beat drums and distorted prog-guitars accompany Ejaz’s sensational, undeniably ecstatic, vocal performance. Improvisation is also a tool by which to escape the self, submerged headfirst in a deep groove your thoughts become quiet and centred. Opening track ‘Ill Allah’ is based on a poem by Dr Allama Muhammad Iqbal, the spiritual father of Pakistan. The song bestows a blessing on its listeners and imparts that ‘the secret of the self is hidden’.

The endless pleasure in this album lies in letting your mind elliptically springboard between the evocative tones of Islam’s peaceful Sufi tradition and the guttural, impassioned guitar cries of rock and rolls finest heritage.