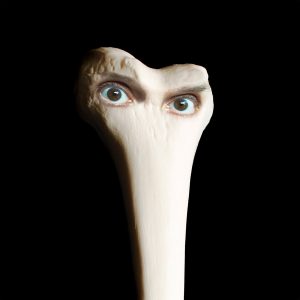 Juana Molina is a good witch. See the front cover of this album: a bone is looking at us! And when a bone looks at us, we’re being watched by the entire history of paleontology. The bone is a sign of having been, it’s the last remain, after the passage of vultures, hyenas, rodents and worms. But the bone became lever, weapon and inscription surface. And the bone is also Stanley Kubrick, that name we invented for jumping from the monkey to the superhuman, as well as from the caves to the moon, to Jupiter and beyond. In ancient folk legends, buried bones were believed to be the cause of luz mala (‘evil light’, also known as ghost lights or will-o’-the-wisp), that strange halo which floats above the ground and scares travellers at night.

But Juana Molina is a good witch, and this particular bone isn’t sinister or menacing, it wants us to reconcile with its kind. It’s both playful and serious, ironic, imaginative and quite magical, just like Juana’s music. 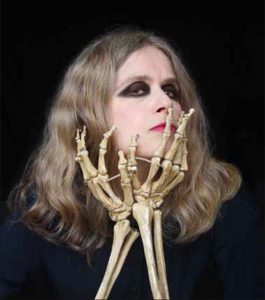 Halo is Juana Molina’s seventh album, and it pursues the experimental path she began years ago, marking a new milestone in the evolution of her own, unmistakable voice. She’s “on an evolutionary journey of her own devising” (Pitchfork), and pushes once more her “eerie, hypnotic” music “to increasingly haunting heights (as written by Spin magazine about her previous record).

The twelve tracks in Halo abound with hypnotic rhythms which seem to draw their energy from immemorial rituals; with timbral explorations and ever-changing soundscapes; with mysterious lyrics often touching on witchcraft, premonition and dreams, always used as metaphors for emotional states; with voices which sometimes move away from word and meaning to be reduced to abstract phonemes and onomatopoeia.

Juana approaches music in a very physical, intuitive way: every instrument and electronic resource is an extension of her body, and is used to express feelings and moods. It’s magic, in its oldest sense: art or technO, which articulates knowing with doing, in order to produce something which didn’t exist before.

Halo was recorded in Juana Molina’s home studio outside of Buenos Aires, and at Sonic Ranch Studio in Texas, with contributions by Odin Schwartz & Diego Lopez de Arcaute (who have both been playing live with Juana for a number of years), and Eduardo Bergallo (who has taken part in the mixing of her previous albums), with Deerhoof’s John Dieterich making a guest appearance in a couple of tracks.