In the course of four years since its inception, Gabacho Maroc has sent audiences into raptures with thrilling performances at more than 150 festivals and podiums in Europe, Africa, Asia and the Americas. Gabacho Maroc’s first album, Bissara (Label Oued, 2014) earned the group a nomination for the African Music Awards in 2015. The single Moussaoui rapidly attained 50,000 views on YouTube, and was selected by the UK label “World Music Network” for its Rough Guide CD compilation, The Best Arabic Music You’ve Never Heard. 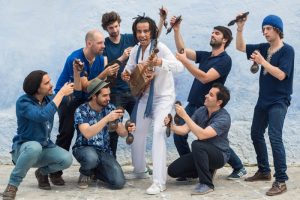 The members of Gabacho Maroc are currently preparing their new album, Tawassol, scheduled for release in January 2018 on the label 10h10 (Cristal Groupe, distributed by Sony). Tawassol means “connection” in Arabic: thus, this second opus promises to be open-minded, modern, and inspired. Chaabi music rubs shoulders with trance, Gnawa opens itself to electro beats, and jazz starts to dance afro: this is a mirror-journey that links Morocco with the rest of the Maghreb, with the desert, and with Western traditions, while likewise returning to its African roots. Guest appearances are not lacking: the album features collaborations with Pascuala Ilabaca (Chile), Jean-Philippe Rykiel (France), and Mixel Ducau (from the Basque Country). Collecting its palette of colours and inspirations from a seemingly endless variety of different sources, drawing inspiration from the musical influences of each of its members, from encounters made along the way, and from the current state of our world, Tawassol represents and evokes the riches we come to enjoy by living with one another in mutual respect: it transmits a musical message of reconciliation and emancipation.