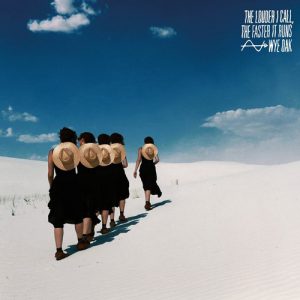 For The Louder I Call, The Faster It Runs, Wye Oak’s Jenn Wasner and Andy Stack flew to one another’s cities—she in Durham, North Carolina, he in Marfa, Texas—for a week or so at a time, hunkering in home studios to sort through and combine their separate song sketches. These shorter stints together produced less second-guessing and hesitation in their process, yielding an unabashed and unapologetic Wye Oak. They discarded past rules about how to write a record, instead funneling all those experiences and experiments into perfectly unified statements.

The result is the biggest, broadest, boldest music Wye Oak has ever made. Louder pursues a litany of modern malaises, each of its dozen tracks diligently addressing a new conflict and pinning it against walls of sound, with the song’s subject and shape inextricably and ingeniously linked. It arrives at a time of immense doubt, when our personal problems are infinitely compounded by a world that seems in existential peril. But these songs answer the challenge by radiating self-reflection and resolve, wielding hooks and musical intricacy as a shield against the madness of the moment.