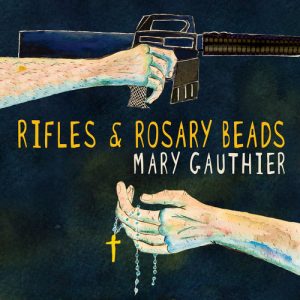 MARY GAUTHIER – RIFLES AND ROSARY BEADS (IN THE BLACK 2018)

Singer/songwriter Mary Gauthier’s catalog includes nine previous albums of confessional, autobiographical, and topical songs possessed of searing honesty, strength, and courage. On Rifles and Rosary Beads, the focus shifts to assist others in telling their stories. Since 2013, she has been involved with Songwriting with Soldiers, a nonprofit founded by Darden Smith in 2012. Anyone who has seen her play during this period has witnessed how the experience of collaborating with veterans and their families has transformed her own approach to performing: Roughly half of her live material is from her participation in SWS. The songs on this recording are released with full permission and participation from her collaborators, and a portion of the proceeds will benefit SWS.

The music fits comfortably inside Gauthier’s simple, rambling, storyteller style, but its lyric content is emotionally and intellectually loaded and revelatory. Gauthier co-wrote with four female and four male veterans, as well as six military spouses (all are credited) and some songwriting pals including Beth Nielsen Chapman, Ashley Cleveland, and Georgia 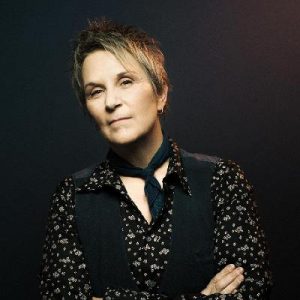 Middleman. The laid-back, countrified “The War After the War” introduces the spouses’ wrenching story: “Who’s gonna care for the ones who care for the ones who went to war.” Album-opener “Soldiering On” is one of two songs she crafted with Jennifer Marino, a veteran of the U.S. Marines. It distills the intentions and pitfalls of many who enlist: “I was bound to something bigger/More important than a single human life/I wore my uniform with honor/My service was not sacrifice/But what saves you in the battle/Can kill you at home….” The blues-tinged “Still on the Ride” and the hushed folk ballad “Morphine 1-2” confront the weight of the ordeal experienced by those with survivors’ guilt. The slow-burning rock choogle of “Brothers” offers the viewpoint of military women who struggle for equality with their male peers. The haunted piano in “Bullet Holes in Sky” was co-written with Jamie Trent, a ’90s-era Persian Gulf Navy veteran who served on the USS George Washington (a nuclear-powered aircraft carrier), who relays his complex feelings about Veterans Day. On closer “Stronger Together,” Gauthier again collaborates with the spouses of the returning vets from the EOD (Explosive Ordinance Device, or bomb squad) who can only look rely on one another for support. Rifles and Rosary Beads is unlike any other record. It edifies and empathizes with the experiences of its participants in delivering brutal yet tender truths; it confronts listeners to embrace without judgment the struggle of war survivors, while experientially relating the extended fact that over 7,400 veterans commit suicide each year. Gauthier and her collaborators look into the gaping maw of war, its trauma, isolation, rage, and loneliness, to reveal the human faces and hearts of its witnesses. Popular music can do no more than this.