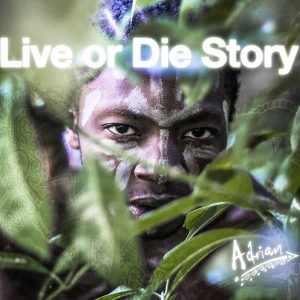 Adrian Kwelepeta, is an incredible talented young Malawian artist. Moving seamlessly between contemporary RnB, Folk and the traditional, his songwriting already shows substantial depth and maturity. In his music, besides being a skilled guitarist and percussionist, Adrian is using his powerful voice not only for singing, it’s also used to build sonic landscapes with vocal percussion, humming, chanting, breathing etc.

Around the time he was born, Adrian’s mother fell into a deep sleep and had a dream. It was a dream of her baby boy playing in front of a big crowd in what she thought looked like Europe. He played the guitar and there were just so many people there to hear him.

She was a single mum, and times were hard (as it was – and still is – for the vast majority of people in Blantyre, Malawi’s second city). And as for most people, she never had a ‘real job’ and supported the little family by selling second hand clothes in the market.

Eight years later, on Christmas day, Adrian was waiting at home for mum to go to town and buy food. She had 3000 Kwacha in her pocket, which was enough to buy a whole chicken, a bag of rice, tomatoes and onions. She, like most Malawians, would only have chicken on very special occasions, and today was one of them. It was going to be a feast.

But then, in the market, she came across a guy selling local guitars.They were made out of wood and metal, covered with a goat skin and strung with four bicycle brake wires. Maybe it was because of that dream, all those years ago, that she decided to forego the special dinner for the family in favour of buying this unusual Christmas present for her son. 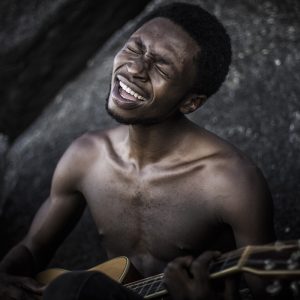 As it was told to me, Adrian ran up to his mother when she came home, grabbed the instrument and wrote two songs right on the spot. He had never played music before, never knew he had it in him, but as soon as he grabbed that guitar, his talent suddenly manifested. And they sang all night.

Growing up, he played this bike brake wire guitar, until his uncle came back from South Africa and saw him play: ‘Oh my gosh, I think this guy is talented’, ‘When I go and come back from SA next time, I’ll bring back a professional guitar’.

During the time the uncle was away, Adrian’s mother had a carpenter build him a new guitar and it looked like a professional one – it had 6 strings (also bike brake wires) and he would use that guitar to write songs every day. It was the only ‘toy’ that he really enjoyed.

His uncle did come back with a ‘real’ guitar when Adrian was 14, and he found a few friends to play with. Of course none of them had a computer or a TV, so he had to spend all his time trying to figure things out for himself.

Adrian says growing up was a hard journey. A single parent home and little money to spare, it’s never been easy. But as long as he had a guitar, he felt as if he was rich. Being able to channel emotions and express how he felt – happy or low, he could always write a song about it.