Sisters Bianca and Sierra Casady, who we know as Cocorosie, may remember some of their performances at the Pohoda Festival in 2015. These days they are commemorated with the seventh studio album “Put The Shine On”.

Bianca is a percussionist influenced by hip-hop with a distinctive color of voice, whereas Sierra is a harpist and opera singer. Seemingly incompatible combination forms a basis of the dreamlike, even mystical atmosphere of their songs. What reinforces the final effect is the use of unusual instruments (a variety of toys) and even more peculiar choice of places for recording (bathroom, barn…)

Their work is a mix of visual arts (that Bianca studied), theater, contemporary media and dance. They have created a musical “popera” titled Soul Life or dance program Nightshift. The unusual blending of various areas of art, forms and genres

Their seventh studio album “Put The Shine On” is characterized by family traumas, which have been a frequent topic of their previous recordings.

CocoRosie’s 7th album, the aptly titled Put The Shine On, is a study in extremes, balancing some of the most pristine and adroit pop songs the band has ever crafted, while simultaneously exploring the most extreme states of human feeling and being—the result being an album that is both pristine and, at times, harrowing.

Put The Shine On is a record that luxuriates in extremes, reflecting the pain and confusion of mental and the anguish of unpacking trauma, while also gleefully celebrating the possibility of newness, of wildness, and the ever-present potential for transformation. Nearly two decades deep into a career marked by experimentation and bucking convention, the duo have made what is arguably their most well-considered, emotionally complicated, and sonically adventurous record of their career. You can also hear selected songs in our broadcast. 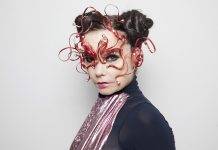