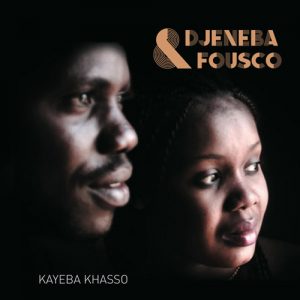 As individuals, they studied and performed music from childhood, and had garnered some acclaim. The two met in 2011 after their individual triumphs on the Tounkagounatalent show, Mali’s popular TV contest. When they discovered the magic of their unified voices, Madame Djénéba Kouyaté (Djénéba) and Monsieur Fousseyni Sissoko (Fousco) decided to collaborate. Like another musical power duo from Mali–Amadou and Mariam–the young couple soon became inseparable on stage, and also in their personal lives. They married in 2012 and now have two children, Prince and Lalla.

Drawing on inspiration from Mali’s griot tradition and the Kayes region’s greatest songwriters, such as Habib Koïté and Boubacar Traoré, Djénéba et Fousco blend traditional West African melodies with modern techniques and topics. Kayeba Khassoconsists of an eclectic mixture of fast and slow rhythms – upbeat, danceable tunes as well as lulling ballads, like “Regrets” and “Kayeba Khasso” that resonate like prayers. Listeners may recognize elements of desert blues or Tuareg rock, AKA Assouf music; Mandinka influences, as in the song “Yiriyoro;” upbeat reggae in “Kono;” electric blues in “Fousco et Djénéba;” as well as rock ‘n’ roll, which is prominent on “Hakilima.”

The songs’ topics depict nostalgia for their home region of Kayes in Mali, especially in the title track “Kayeba Khosso” (which means “from Kaye Khosso”). They reflect the reality of those forced to depart in search of work. The compositions also playfully represent the youth culture of Bamako, Mali while mapping out their desires and hope for a bright future.

The opening ballad, “Regrets,” is particularly beautiful. The song begins with a gentle swing softly plucked on the acoustic guitar, as the kora floats sweetly above. The couple sings in unison and an improvisatory electric guitar provides a solid foundation in the distant background. The voices build as the cello responds to their calls with a tremolo. The beat kicks in–swinging clave and shaker are punctuated by a rim shot on a snare–and the djembe enters shortly after. Djénéba takes the lead, calling out, with a breathy response from Fousco. Fousco’s guitar lines feel like an extension of his soul, and his compositions compliment the beauty of their message. Their voices dance between singing in unison and trading the lead and response, giving each singer equal time, and employing a plethora of styles: soft, powerful, sweet and melismatic, all the while entrancing.

With fortune shining in their favor, Ballaké Sissoko invited Djénéba and Fousco to Paris in 2015 to participate in the Africolor Festival, where they were awarded a two-year artist’s residency. They devoted the time to creating this album, which will inevitably make an international splash. Hopefully the ripple effects will send them on tour, and we can catch them live in our own countries soon enough.