During the time of a massive pandemic, global warming awareness, and rampant school shootings comes an album with a glimmer of hope.

Created and crafted with intent, Telescope is a concept album that presents a conscious shift from internal to external, and intended to be listened straight through.

Telescope is 9-songs deep that tunes-in the listener to the main character who goes through a journey of self-reflection, evaluation of mortality, confrontation of death and eventually dawns a new perspective. Written over the course of six months, Scott Tournet reflects, “The first 6 songs were initially inspired by my own issues with addiction, anxiety, and depression as well as a search for meaning. That being said, they were also inspired by other people who I know who were struggling with the same issues.” He continues, “One day I was hitting a wall and I took a break and started watching a show called “One Strange Rock.” The first episode told the stories of 5 or 6 different astronauts and the “overview effect syndrome”. Overview effect syndrome can happen when an astronaut looks back at Earth and is blown away by seeing our planet from up above. This had a profound effect on me and the concept of rising up above one’s self and seeing the world from a fresh perspective with more clarity and a wider view inspired me creatively and personally.”

Tournet continues, “The record is about being jolted into seeing the world from a fresh perspective. It’s also about how you can be doing endless self-analysis but that often the thing you’re looking for lies outside of yourself.”

The new album compels the listener’s attention all the way through with many standouts to be released as singles including, “Wake Up” set to be released on May 21st. The track sets the stage with afrobeat guitars, blissed out synths, heavy percussion and presents a song about addiction and realizing one needs to reach out for help. Tournet comments, “It’s a pop song craft and production dealing with a heavy topic, yet an ultimately optimistic message. At first the refrain ‘can’t let go’ is referring to their addiction but by the last chorus ‘can’t let go’ is referring to this new, healthier path that they have found. Funky verses, soaring choruses, and a bridge that sounds like Quentin Tarantino made a movie somewhere in the Middle East.”

Another advance single and music video will be the title track, “Telescope.”

The title track hits at the heart of the story, and it jolts the main character into a fresh perspective as heard in the lyrics” I’ve been peering through a Telescope…looking at the world up close…but never opening up both eyes.” Scott says, “these lyrics from the title track summarize the plight of the main character through the first half of the record. On top of a heavy afrobeat groove, this song stacks analog keyboards and delayed guitars that drift along with a song that could work in a stripped down singer-songwriter setting. An amalgamation of genres and elements that are disparate but blend in a natural way.”

The new album closes out with “Children Are The Revolution” in which the narrator focuses on the next generation and through the searching and spiritual questioning concludes, “Love shines through it all.” Tournet recalls, “I was inspired by how the children from Stoneman Douglas High School responded by taking political action after the “Parkland school shooting.” It’s further inspired by Greta Thunberg and thousands of other kids who are trying to make the world a better place.”

The band rehearsed the new album for three months 3-4 hours a night. They worked and re- worked new rhythms, wrote horn lines, rearranged parts, sped up and slowed down tempos.

Scott comments, “Our percussionists like to get creative in utilizing unique sounds. In addition to a smorgasbord of percussion, they recorded a jawbone and a turtle shell. In addition to analog synths, rare organs, vintage drums, guitars, and amps, there was Baritone Sax, Tenor Sax, Flute, Bass Clarinet. Beyond that, the majority of the songs were written on a Wurlitzer Electric Piano that used to be in Waylon Jenning’s band.”

Reflecting back Scott says, “We kind of took a reverse technological approach. I started by writing to a rhythm that inspires me. Next, I jumped on Waylon’s Wurlitzer and found some chords that seemed to fit. I’d hum some sounds that felt rhythmically fitting and would come up with a section of a song. I’d play the songs for the guys and they would pick out the ones they liked the best.”

They recorded at Studio West in San Diego as it can accommodate the large band with added musicians in the live room to capture the excitement of a real “performance.” Tournet comments, “This is the most collaborative record we have made to date. It is also the first time we’ve recorded as a full band. The first record I recorded the instruments one at a time. The second record, we recorded bass, drums, guitar, and percussion first and then added horns, vocals and keyboards later. Since we had been touring, rehearsing, and playing together so much we really wanted to capture the energy and the spirit of the band, together in a room, performing the songs. Sonically, it’s a couple levels up than anything we’ve done.” Collin Dupuis (Dan Auerbach of The Black Keys, Dr. John), a Grammy award winning engineer, mixed the new record at his Easy Eye Studio in Nashville, TN. Dave Cooley (Tame Impala, J Dilla, Spoon, Animal Collective, Dr. Dog) mastered the record.

Elektric Voodoo first came together in 2016 around the time Tournet left the band he had built up for 12 years with Grace Potter and Nocturnals. Together they took a leap of faith to create something new. Tournet says, “We share a common creative vision and a true bond has been formed through many many hours together…on the road, in the rehearsal room, on endless phone calls during this crazy year of the pandemic. I think it can’t be stressed enough that we’ve really done this thing the old fashioned way and all of that heart is in the music. The music is pure in that way.” 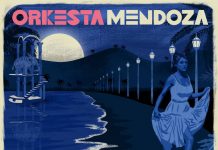