L’Attirail band was born from a road encounter in February 1994. Xavier Demerliac (guitar and brass) and Jean Stéphane Brosse (piano and accordion), met when travelling and decided to create an acoustic band combining the energy of rock and roll and the influences of Eastern European folklore. ‘L’attirail’ band at first a « balkano – parisian » trio played his repertoire in Paris bars for two years. Then it became a quintet. On their first album ‘ Musiques des prefectures Autonomes ‘ in 1996, ‘L’Attirail’ band layed down a trans-european imaginative and odd music. 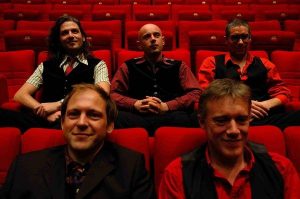 Now on, every album is conceived as a musical road-movie between Paris, Moscow and Istanbul. ‘L’Attirail’ band ‘s music throws a bridge between two opposite worlds : country life and big cities, trip and slow progress, the Eastern and Western European countries, tradition and modernity, reality and dream… The band plays in France (300 gigs) (Printemps de Bourges, L’Olympia with teh ‘No Smoking Orchestra’, L’Elysée – Montmartre, L’Européen, le Café de la Danse, la fête de l’Huma, La Maroquinerie …..) but also in Germany (WDR World festival and 30 other gigs), in Belgium and Switzerland…