The Capitalist Blues is Leyla McCalla’s way of processing the current political environment, where many of the issues are financial, but they’re rarely simply financial. “It feels like everyone’s in a pressure cooker in this country,” she says. The album is McCalla’s third, after Vari-Colored Songs: A Tribute to Langston Hughes (2013) and A Day for the Hunter, A Day for the Prey (2016). Those albums and her time as a member of the African-American string band The Carolina Chocolate Drops presented her vision in songs that revealed the realities that people lived, often expressed in metaphors. She explored Haitian Creole identity issues in songs with arrangements that focused on the song.

She often sang and accompanied herself on cello, banjo, or guitar. The New York-born McCalla has lived in New Orleans since 2010, and A Day for the Hunter, A Day for the Prey broadened not only her examination of Creole identities but her sound as she brought in a number of musicians to add fiddle, clarinet, piano, electric guitar, and additional voices. Her growing relationship to the city’s musical community led her to consider her relationship to New Orleans on The Capitalist Blues, and for the first time, it led her to record with a band. It wasn’t by design. Producer Jimmy Horn asked her sing on a session with his acclaimed New Orleans R&B band, King James and the Special Men, at a time when she had new songs but was unsure what forms they should take. While singing with the Special Men, she realized that working with Horn and his band in New Orleans might be the right way into the new material. The collaboration marks the first time someone other than McCalla has produced her work. The Capitalist Blues shows a more physical, danceable side to McCalla’s music. 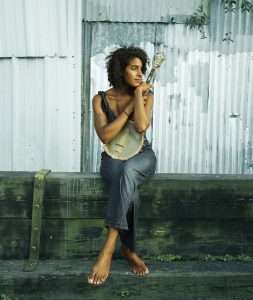 The title track is a swinging blues, and it’s easy to hear the classic New Orleans R&B in “Me and My Baby,”and the calypso in “Money is King.” The album also puts McCalla’s voice in a number of new contexts as the size and composition of the band behind her varies from track to track. “There’s more arrangement,” she says, so her voice stands out in the way fans of her previous albums might expect on the spare “Pennha,” but she’s clearly part of a rowdy group on “Me and My Baby.”The pressures people deal are subtext on some songs, but they’re tangible and personal in others. “Heavy as Lead” addresses the threat caused by lead in the soil—a problem that became very real for McCalla when her daughter tested positive for elevated lead levels. The Capitalist Blues is superficially different from McCalla’s previous albums, but she hears the connections between them all. She still sings a number of songs in Haitian Creole, which she thinks of a “language of resistance,” and she further explores the connection between New Orleans and Haiti. Her interest in social justice issues remains, and many of the themes are extensions of ones she examined on A Day for the Hunter, a Day for the Prey.

The lineups are very different, but the songs come from the same place. “To me, it’s all folk music,” McCalla says. The album is striking as McCalla employs a broader musical palate than on her previous albums, one that often involves a full band and percussion. One instrument noticeable in its absence is the cello, which has been McCalla’s signature instrument throughout her solo career and her time with the Carolina Chocolate Drops. “I’ve come to a place where I feel like making art is not tied to being a cellist,” she says.