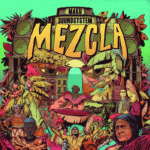 The immigrant experience is scary and it’s exciting. Everything is new, everything is possible. There’s a city, a country, an entire culture to discover. It’s an opportunity to create, to find a voice that speaks loud and proud, to connect past and future. A chance to make history. That’s what the eight-piece M.A.K.U. Soundsystem does on their fourth album, Mezcla (‘Mix’). They give us America now, in the raw, through the eyes and ears of Colombians who’ve arrived and made their homes in New York City. It is, in every way, a mix, an invitation to think and to dance.

Mezcla is a relentlessly honest record. The music hits the feet and the hips, powerful and overwhelming, while the lyrics reflect the lives the band members live. There’s the giddy flirtation of a summer Saturday night on ‘Haitiana’ and the thought that comes from looking around somewhere so different and asking ‘What Do You Wish For.’  But it also embraces darker political questions that don’t have easy answers. The opening track, ‘Agua,’ for instance, wonders why some people own the seeds that should be for everyone – who are those who have and who are the dispossessed? And ‘De Barrio,’ the warm, inviting waltz that closes the disc, examines the journey so many coming from Latin America to the US undertake.

“They’re putting their lives at risk to come to El Norte,” explains bassist and singer Juan Ospina. “But the borders they cross have all been created by man. Look down from space and you won’t see them.” 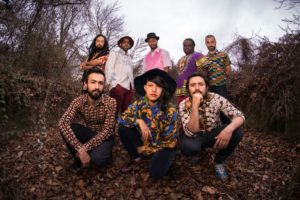 Every moment of Mezcla mixes the musicians’ past and their present. ‘Let It Go’ builds from a percussive root born in Colombia by way of Cape Verde, hits a groove straight out of West Africa, then adds bright retro Moog that comes from a ‘90s club, and tops it with horns that edge into jazz. It’s a perfect culture clash, the immigrant melting pot on disc. As the New York Times noted, the band merges “Afro-Colombian rhythms with hints of Afro-beat, delivering exhortations as dance grooves.” Colombia remains the foundation, in the DNA of the band members, but they’ve erected their own brand-new house on top of it, a structure that continues to grow and change. Welcome to modern America.

M.A.K.U. Soundsystem is a powerhouse that’s been built over years of rehearsals and gigs, criss-crossing America from the Lincoln Center Outdoors -in their adopted hometown of New York- to Chicago, Los Angeles, Toronto, Canada and around the globe to the Roskilde festival in Denmark and onto the Atlantic Music Expo in Cape Verde. Everywhere they’ve won over friends: a storming appearance at globalFEST saw the band awarded a touring fund, while new outlets have kept heaping praise on them.

That restlessness, and the hope for the future, is perfectly captured in ‘La Inevitabile.’

It’s a statement, an embrace. Think and dance. A way forward delivered with the urgency that’s become a hallmark of M.A.K.U. Soundsystem. Mezcla captures the live sound of the band, that thrilling rawness where the rough edges become a vital part of the whole, plenty of freedom but with the tightness honed by night after night of gigs. And that’s exactly how Mezcla came together.

“We first recorded the songs two years ago, just after they were written,” Ospina recalls. “But when we listened to it, there was no sizzle. It didn’t sound the way we did on stage. So we decided to wait. But we played the material for audiences, we worked it in. Then, two years later, we were in the Creamery Studios in Brooklyn recording a track. Quinn McCarthy, the engineer, caught us perfectly. This was what we were like live. We knew we’d found someone who could really capture our sound, so we recorded Mezcla again with him. Each section of the band – rhythm and percussion, horns – played live. And what we’ve got really kicks. It’s who we are.”

It’s passionate and blazing, turning from anger to tenderness, to endurance and hope. M.A.K.U. Soundsystem is the modern immigrant experience in a microcosm – and it’s not so different from all the generations that have gone before. People carrying their own mix of the past and the present, the old and the new, tradition and modernity. Mezcla reflects the lives they’re building.

“We try to keep it human,” Ospina says. “To give people something they can relate to.”

To think and dance.