These are not only the words of the story MY BABY has written that lies at the heart of their fourth album, it also is the essence of what the band is bringing with their music and live show to an ever growing audience.

For those of you not yet familiar with the Dutch-New Zealand trio, they play roots driven hypnotic dance. It’s a sound informed by gospel and blues singing and playing fused with ancient folk melodies. Added to that is the rawness of seventies funk, african desert blues, moroccan gnawa, indian raga and a touch of EDM  all played on guitars and drums without using computers or samples. They have been spreading their psychedelic blues-trance rave to the approval of audiences worldwide since 2012, featuring on renowned festivals such as Glastonbury (UK), Isle of Wight (UK), Sziget (HU), Fusion (DE), Exit (RS), Lowlands (NL) and Pinkpop (NL).

MY BABY is more than just the band’s name. It’s a title that refers to an allegorical figure, a central character in the band’s musical story. She is in part a phantom muse, a result of the combined imagination of the band members. She’s often described as, ‘a girl in the ’70’s fantasizing about being a flapper girl and dancer in the ’20’s. 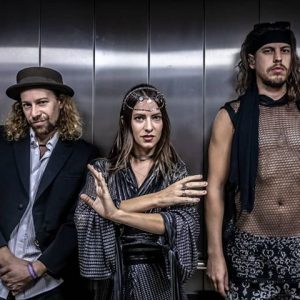 For their latest album they started writing a story about their muse first.

The trio elaborates:  Daniel ‘Da Freez’ Johnston (guitar)
“We thought it would be interesting to start with writing a story that follows the narratology of the hero’s journey. This offers a template for a tale that involves a hero who goes on an adventure, overcomes a crisis and returns home transformed. A story that takes place during the course of a night. It starts in early evening as the sun sets and the final stages take place at dawn.  The songs on the album are meant to accompany the story.”

Joost Sheik van Dijck (drums / vocals) explains the title MOUNAIKI and the motives of the main character;  “Mounaiki is the shamanistic name given to the main character and to the experience she goes through. A ‘spirit name’, if you like. It means ‘love and will’, or the combined energy of love.  The character’s quest to find meaning and identity leads her to a path of transformation.”  The world that MOUNAIKI inhabits consists of the suffocating environment of suburbia, with all its limitations, juxtaposed by the exhilarating experience of the inner city with its boundless possibilities. The pervading threat of anonymity in the city leads to a search for tranquility in nature.

“This way of working allowed us to be very diverse in our songwriting. The labyrinthian dream like world, where the character travels through different ages, inspired us to delve into jazz and ragtime from the twenties, the american songbook of the thirties as well as film scores from forties film noir and italian neorealism.” Says lead singer and guitarist Cato van Dijck.