After a hiatus of ten years, legendary Senegalese duo Toure Kunda makes its comeback with ‘Lambi Golo’. With the title of the album, the brothers from Zinguinchor, the largest city in Casamance (an area in Senegal wedged between Gambia in the north and Guinea-Bissau in the south, which due to its location to the south of Gambia, a former English colony, has always taken a relatively isolated position from the political and economic center around the capital Dakar) refer to traditional African wrestling, and in the funky title track they utter their regret for the fact a century-old tradition is now reduced to a spectacle in which everything revolves around money. ‘Lambi Golo’ opens with the delicious ‘Demaro’, a warm call to help others regardless of their origin or needs, with Manu Dibango’s legendary sax in a leading role. For this album the duo also revisited ‘Emma’, one of their biggest successes, and with the help of guitar hero Santana and rapper Nelson Palacios (Cuban Beats All Stars) gave it a salsa/hip-hop flavor. ‘Malang’, on the other hand, is an ode to the late Malang Adama N’Diaye, an artist whose music still holds a warm place in the hearts of the inhabitants of Casamance. 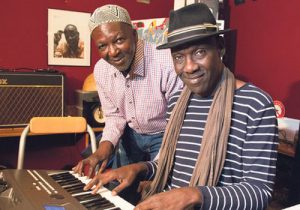 ‘Sene Bayo’, in which the brothers pay tribute to Casamance artists like Bouly Sonko (singer, dancer and comedian with the Théâtre National Daniel Sorano), Atab Cissoko and Sene Bayo, a ubiquitous figure in Ziguinchor, the birthplace of the Toure brothers. For ‘Mister Farmer’ Ismaïla and Sixu Tidiane Touré switch to English and invited Jamaican reggae veteran Kiddus I. However, don’t expect reggae here, because this song, intended to emphasize the importance of agriculture and fishing, has a bit of a Latin-jazz vibe going. But of course on a Toure Kunda album that dash Afro-reggae cannot be missing and we get it in the form of ‘Ka Badiyassi’, an ode to the deceased with a leading role for Seckou Keita‘s kora, and ‘Oustache’, about the importance of a sound education. For ‘Soif De Liberté’, largely sung in French, in which the brothers express their desire for a free, independent but above all else peaceful Casamance, Toure Kunda was assisted by Congolese singer-songwriter Lokua Kanza.

And with the highly danceable ‘Sotolal’, one of the highlights on ‘Lambi Golo’ and a call to share your wealth with the underprivileged, the album ends with a similar message as could be heard in opener ‘Demaro’. If you’re still on thee lookout for an excellent African album to start your summer with, we can highly recommend ‘Lambi Golo’. The Senegalese elephants are back!