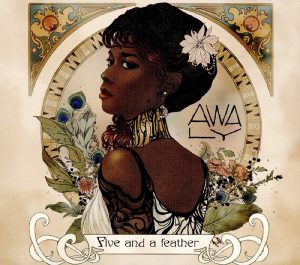 Once upon a night, Awa had a dream…Taking place in an enchanted and somewhat mystical atmosphere, haloed in a scenography summoning the moon, the earth and the elements. A shamanic female with an ancestral blend between Native Americans and Africa was there, speaking in an unknown language, telling stories, some real some fantasized. She would receive those tales from others, would make them hers, would get soaked in them, shared their joy, eased the pain or sadness contained. Upon awakening, the Shamanic narrator had vanished but her presence had remained palpable, Awa made her the storyteller of this new album: Five and a Feather. Five, like all these things counted as five: the senses, the oceans, the lines of a staff, the fingers of a hand … and Feather, the feather, that magical element that connects all, the one Awa used to write and compose the ten tracks of this album, in which, through SainaSix’s brushes, she became the first black woman immortalized in the aesthetics of Mucha’s Art Nouveau. 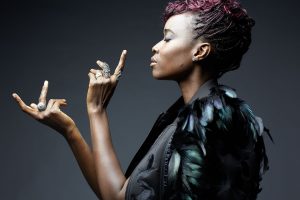 Ten tracks that take you back to the vinyl records Awa used to listen in the family room, when soul, blues, African music and Afro-Cuban orchestras harbored her childhood. Although she has chosen the jazz velvety path, Awa has however decided to alter it, choosing to adorn it with folk motifs, or letting guests leave their marks. Ballaké Sissoko’s kora, Paco Sery’s senza, Greg Cohen’s double bass, Faada Freddy’s singing, the steel-guitar or erhu (Chinese violin) are the many elements that illuminate the tales of the shamanic storyteller. Produced along with the duo Jean Lamoot and Pascal Danae (Victoires de la Musique 2015, World Music category with their band Rivière Noire. Collaborations with Black Desire, Bashung, Salif Keita, Gainsbourg, Giberto Gil, Peter Gabriel, Ayo, Mayra Andrade) Five and a Feather reproduces the warm atmosphere of captured live sessions where the instruments meet, interlock and build up the haven that will host the main instrument of this album: Awa’s voice. These words she gently places or drops over keys such as tears of either joy or sadness, flowing from this source called love.

The one love we’d like to feel again someday but known gone forever. The one that is born, suffocates and on the verge of dying out until a saving breath comes to the rescue. The one we have for a dear one such as a friend (Friendship). “Let Me Love You” and its love that drives one crazy, the declaration at its purest “Will You Be Mine” (the only song is not coming from Awa’s magic but written by the mystic Slow Joe) or Here, a duet with Faada Freddy, where the loving your neighbor message strangely echoes with the plight of migrants who perish at sea; passionate, destructive, disappointed, romantic, universal: love is the main theme of Five and a Feather. An album, composed and recorded as a thin lace dotted with details that will only be revealed to the one able to unveil them.