Meaning ‘to get lost to find a new way’, Kaybola is the genesis of a number of months on the road, touring, hopping from festival to festival including, Montreux Jazz Festival (Switzerland), Amsterdam Dance Event (ADE) and Wonderfruit Festival in Thailand. Led by multi-instrumentalist & producer, Tolga Böyük, performing alongside Eralp Güven (percussion) and Erdem Başer (guitars), Islandman’s distinct sound draws on a rich pool of influences across the 70’s psychedelic music scene in Turkey including, Eden Ahbez, Can Kozlu, Okay Temiz and Baba Zula.

After discovering and diving into the musical multiverse of hip-hop, Afrobeat, Indian classical and balearic dance, Böyük released his debut album as Islandman Rest In Space, an international melding of global psycho-electronic beats, exploring themes of fictional dreamscapes and cosmic futures. 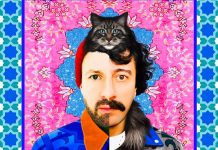