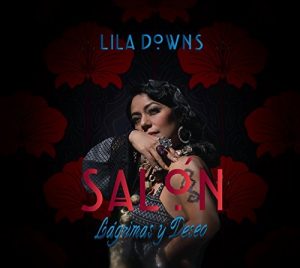 On 2015’s Latin Grammy-winning Balas y Chocolat, Lila Downs delivered an album of folk songs and originals that juxtaposed modern Mexico with its rich history. It songs highlighted the impact of the drug war, environmental devastation, and the widening rift between economic classes in Mexico. Downs believes an artist’s role is not only to create but to be an activist. Salon, Lagrimas y Deseo is in many ways an extension of Balas y Chocolat, though its emphasis is different. Here Downs employs classic and original songs to deliver a feminist manifesto with forms ranging from cumbia to danzon, rancheras to blues, son to banda and conjunto. Set-opener “Urge,” by Uriel Martin, is a passionate confession of loneliness and raw pain that only love and affection can assuage. But Downs’ women refuse to be conquered by desolation. Her first single is the self-penned “Peligrosa” (“Dangerous”) a paean to “Las Adelitas” — female revolutionaries who dare to live as they wish, accepting the pain, tears, and consequences that are sometimes the cost of freedom. She is accompanied by a rock quartet and a full mariachi orchestra, and delivers the song as a ranchera blues. It’s followed by “Tus Pencas,” a riotous erotic banda. She covers two gorgeous love songs by Augustin Lara: “Palabras de Mujer” is a bittersweet ballad that reflects on attraction even when it’s not what we want, and “Piensa en Mi” is a son that paints commitment as something only women can truly understand. Alvaro Carillo’s “La Mentia” is delivered as a jazz ballad by a mariachi band. Downs’ vocal combines the phrasing of Dinah Washington and Omara Portuando. Carla Morrison guests on “Ser Paloma,” a hybrid of tender ranchera and bittersweet indie rock. Its first verse translates into English as “Not in my dreams, nor at dawn/You do not command, you do not command/Not in my house, not in my life…You do not command….” Downs and Morrison’s entwined voices are devastating against the percussion, muted trumpets, and strings. “Son Juarez” is a burning modern son-cum-cumbia performed with Banda Tierra Mojada; it’s a tribute to Benito Pablo Juárez García, a Mexican lawyer and politician of Zapotec origin from Oaxaca who served as Mexico’s 26th president. He ushered in what is known as La Reforma del Norte. The great Spanish flamenco singer Diego el Cigala joins Downs for Jose Alfredo Jimenez’s broken-hearted classic “Un Mundo Raro,” made immortal by Chavela Vargas; it’s made sadder by the singers resolving to protect their lost love by lying to the world as Downs enhances the song’s meaning; in this duet both partners are left, both are bereft — lost love is a shared tragedy. Downs closes the set with a more swinging reprise of “Peligroso” in duet with Chilean singer/songwriter Mon Laferte underscoring the album’s true theme of women as dangerous when they take freedom as their mantle. With Salon, Lagrimas y Deseo, Downs honors traditions from Mexico and throughout Latin America without succumbing to their weight, and stands tall as she does so.