Malphino are an outer-national, mystical band from an imaginary tropical island that has dreamt up a cinematic score and audio backdrop to their idyll. A promised land of hypnotic cumbia rhythms, subtle digital warbling, accordion textures, voodoo vapours and woodblock charm awaits the off piste explorer willing to step through the arch and Visit Malphino, the debut album from this London based collective of musicians and visual artists.

As source material of traditional Latin American music and cumbia, has over the years, etched itself in the global tracks of music, London has simultaneously become a meeting point and international canvas for new tropical concoctions. And it is the capital that has provided the nourishment for Malphino to flourish – members of the Malphino collective come from Japan, Malaysia, Colombia, France, Philippines and the UK. It is testament to the open-minded nature of record label Lex (MF Doom, BadBadNotGood, Kate Tempest) who has given Malphino a stage to transcend the borders of Latin America and the London music venue where it all began.

The joyous, often frenetic, style of cumbia that Malphino have landed on, tips its hat to the various denominations of modern cumbia movements worldwide yet carves its own unique, transcendental spin on the genre. Reinterpreting the traditional Colombian banda, playing organ, accordion and tuba, their sound integrates an array of percussion and rhythms from either side of the Pacific ocean with a strong emphasis on East-Asian folkloric traditions alongside the distinctive origins of Latin America, Peruvian chicha and cumbia in a myriad of styles.This heady mix of volcanic sounds is given extra potency by a fluid use of electronic sequencing, with reverb and echo effects laced into the melodic lines and vocals to recreate the dreamlike rapture of their magical island. 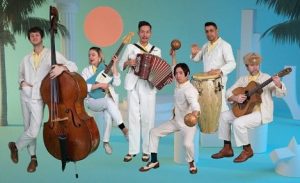 The collective took roots back in 2010, when a trio of friends began promoting Latin-oriented nights in Hackney, London. Yu Sato DJ’ed from his obscure vinyl collection whilst Alex Barrow (accordion) and David Aird (tuba) would interpret a live mixture of Latin songs and Italian film soundtracks by Morricone, Piccioni and Nino Rota. As the event gained momentum, a small community of musicians dropped in and out to lend their own south-American styles and eventually a cumbia band of 6 to 8 musicians took form. The name the band decided on originated in the portmanteau of the original members’ respective nationalities: Mal (since David was half Malay) and Phino (since Alex was half Filipino). It was this that triggered the initial concept of an abstract symbol of inspiration. To their new band Malphino sounded like an otherworldly place or country. The more they spent time together, the more they embellished this idea and gradually a fantastical island began to take shape in their collective imaginations. By 2012 Antonin Voyant (percussion) and Graham Mushnik (organ) of Catapulte Records had joined the adventure, and recorded Malphino’s first EP, “El Lava de Gabacho”, live in their East-London basement. This was followed by the release of “Lalango” – named after the island’s highest mountain – on NYCT in 2015.

Their debut album ‘Visit Malphino’ builds on these initial records and dives deep into the island’s mythology. It’s a 17-track epic that provides the soundboard to years of imaginative cultivation. With clues in the titles, each track represents a different element to the island. It embodies the growth of the Malphino concept from an abstract idea within the minds of a few friends to a more complex fantasy at the centre of a small community of musicians and artists.

David, Graham and Antonin’s work for the film and theatre industries across the UK, Germany and Mexico accounts for an album brimming with drama and atmosphere. Speculation is open-ended; the band encourages anyone to join the Malphino conversation and contribute ideas and creative expertise to the layout of the land. Both Yu and Alex are professional art directors and they give the project a whole new dimension, through artworks and stage outfits.

Malphino have played multiple festivals and venues across the UK including Rich Mix, Hootananny Brixton, Jazz Cafe and festival stages at Bestival, Secret Garden Party and Carnaval del Pueblo. They have also promoted their own special events which include parties at their self-styled Republica de Malphino embassy.