Nu Genea is an Italian producer duo that also creates their own songs. On the album “Bar Mediterraneo”, they presented a distinctive musical style that reflects on Neapolitan history and the present day.

Four years after Nuova Napoli, Nu Genea are back with Bar Mediterraneo, a new album and journey, which projects the sounds of the Neapolitan duo formed by Massimo Di Lena and Lucio Aquilina even further.

Nu Genea’s Bar Mediterraneo is an idea of a shared place where people meet and fuse together; a space that leaves its doors open to travellers and their lives, always exposed to the whims of fate. Some of this can be experienced through the multitude of sounds that come together in the tracks, layers of different acoustic instruments, voices and synthesizers merging in a unique musical blend.

Opening up to the voices of many different people, separated by languages but united by the sea and the music, Nu Genea’s hometown, Napoli, becomes a true place of encounter.

Nu Genea know the charm of their city. Their music is perfect for a party: it’s danceable, catchy and catchy. But behind their arrangements with retro charm are years of intensive study of the greats and hidden gems of Neapolitan pop history.

You can hear this all along. In “Gelbi”, a gorgeously deep and propulsive Ney flute plunges into murky waters of the melancholic Tunisian dialect sung by Marzouk Mejiri. In “Marechia'”, unbridled happiness and sun ooze from the delicate vocals of Célia Kameni and create an acrobatic bridge between French and Neapolitan language. In “Straniero”, your soul is arrested from the moment the slow spell-binding mandolin ignites the hypnotic patterns recorded by the legendary Afrobeat drummer Tony Allen. In “Bar Mediterraneo”, the title track, bittersweet guitar’s riffs, analog waves and choirs are overwhelming the song giving you what you would like to hear on a boat trip along the Amalfi Coast.

Nu Genea couldn’t afford to overlook their firmly anchored roots into the Neapolitan culture and its dialect with “Tienaté”, where the power of neapolitan language (interpreted by Fabiana Martone) supports those quarter-tone strings and the uncessant folk-disco groove that spreads to the entire song. In “Praja Magia”, repetitive mandolin riffs lead the song, giving space to a choral yet tight vocal line that speaks of Varcaturo, a village close to Napoli. In “Rire”, a volley of poetic, deceptively laidback, lyrical fury interpreted by Sicilian Marco Castello intimately combines with a highly musical, multi-textured instrumental backbone and the swoon of a chanson in its heart. In “La Crisi”, the lyrics of a Raffaele Viviani’s poem from 1930 have been adapted to a laidback jazz-funk groove in full NG style. In “Vesuvio”, revaluing the evocative verses and powerful mantra of Vesuvio, Nu Genea re-adapted to the dancefloor a folk song by the working-class band E’ Zezi from Pomigliano D’Arco, combining the voices of a school choir with Jupiter-6 arpeggios and bold percussions.

“Bar Mediterraneo”, as Lucio and Massimo describe it, is meant to be a meeting place. A place where curiosity becomes routine. A place that embodies the sound of Naples in all its aspects. But the door is open to all travellers and their lives exposed to the vagaries of fate. The Neapolitan dialect, or rather the Neapolitan language, therefore comes to the fore in many of their songs, such as in the song “Tienaté”.

Bar Mediterraneo is the place where people constantly return to transform curiosity into participation, tradition into sharing, unfamiliar into familiar. When travellers come through its “doors”, carrying their treasures of words and emotions, they aren’t strangers any more. They take part in a shared experience, enriching themselves and others by leading to unexpected musical journeys.

Through the music of Nu Genea you will learn a lot about Naples and at the same time you will get the chance to have a great time with dance music. 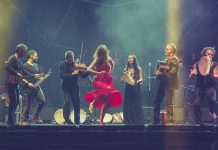