The Bahian artist Lucas Santtana’s ninth solo album, O Paraíso, urges us, in ten songs, to modify our line of thought: Paradise exists, right here, right now. It might be wounded but it’s still showing signs of life. We’re responsible for its long term survival, and also, partly, for its constant metamorphosis. Though gentle and full of inventive sonic touches, this is a militant record that mixes Brazilian music with jazz and electronica.

Brazil still exudes a fantasy of mystery and paradise to the rest of the world, just like the one described as far back as the 16th century in the stories of the German adventurer Hans Staden, or the one we see in the work of the 19th century French painter Félix-Émile Taunay – a vision of Eden that Brazilians later transposed to their way of playing the guitar. Lucas Santtana took inspiration from that vision, realising that the feeling of beauty it encompassed was, in fact, universal.

Every time we go on holiday to a place of extreme beauty, deep in nature, the phrase this is paradise takes hold of us. Intuitively, we see planet Earth as a place of wonder. And even though this premise has been thoroughly dented by the rise of an economic model based on the extraction of natural resources, it remains fundamentally true. Santtana has built this opus around it: Paradise is already here (O Paraiso jà é acqui), so let’s stop the descent into hell.

O Paraíso took shape ‘during the pandemic,’ Santtana explains. Such a hitch in human history was never going to quietly circumvent this son of Bahia, the capital of Afro-Brazilian religious syncretism, with its gods and goddesses who control water, thunder, forest and sea. ‘It was like a message sent to us by the animal kingdom in the face of a suffocation that has now long been foretold. The floods, fires, droughts, tsunamis, delayed

monsoons, melting glaciers and oil spills are all alarm bells that we don’t want to hear.’ How many maydays need to be sent before our eyes are opened, asks Lucas in a delicate song called A Transmissão (The Transmission).

Continuing as he always does to treat grave subjects with a joyful elegance, Santtana put O Paraíso together with a light touch, allowing himself to open out in places where emotions are shaped by the flow of life, (as in ‘Sobre La Memoria’, sung in Spanish). Santtana read The Uninhabitable Earth by David Wallace-Wells, with its description of hell at +4°C and might well have allowed himself to go to pieces as a result. But instead, he transformed drama into hope, counterbalancing despair with his reading of the Italian philosopher Emmanuelle Coccia, author of Metamorphoses: “Every being is a metamorphosis, from gestation to our nutrition. All life is metamorphic; it traverses identities and worlds without ever succumbing to passivity.”

Lucas Santtana tries to uncover the source of our afflictions, all the better to fight them. The first calamity is “avidity” or rapacious greed, which, married to “Mr Consumption”, has given birth to plenty of children “all of whom call themselves deceased.” ‘I’d like to say to Elon Musk that it’s stupid to want to go to Mars when we have the immense possibility of living on the only habitable planet on the solar system…’ (‘Vamos Ficar Na Terra’). But rather than putting the brakes on all this frenzy, the concupiscent, the agro-industrialists, the manufacturers of advanced technology accelerate the fall with their lies. And now it’s decision time: live more or die already, a question posed in the song ‘Biosphere’, performed in French with the band Les Petits Chanteurs from Asnières.

Santtana, with his suave voice and gentle guitar, already used electronic sampling and atmospheres in the past (on O Deus Que Dévasta Mas Tam Ben Cura in 2012, Sobre Noites e Dias in 2014, Modo Aviao in 2017), before returning to the simplicity of guitar-voice in O Ceu E Velho Ha Muito Tempo in 2019. O Paraiso collates all these approaches, widening the existential question from ‘Who am I?’ To ‘Where am I?’

O Paraiso was an opportunity ‘to change our cultural references,’ says Santtana. ‘Brazilians have never had to play a hegemonic role, because Brazil has never been a country of mediation. Rather, my country has always afforded an opportunity for coexistence. But when the far-right came to power in 2018, conflict became a mode of governance.

The struggle to safeguard Amazonia has become an essential one, defining the conditions for the survival of all those who inhabit that blue biosphere known as the earth.’ 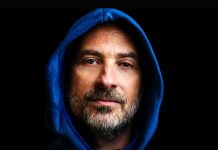 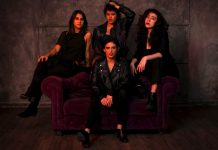 LADAMA SINGS NOT ONLY ABOUT WOMEN