From her current home in Mexico, she says, “I needed time for myself” and answers our question about how she’s doing during the quarantine:

“I have good days of great creativity, of being very positive and there are other days where I go to hell. I get super depressed, I think everything is wrong, but I really liked being at home for so long. It had been years since this happened to me because I spent five years on tour, non-stop.”

Many artists agree that creative processes have been multifaceted in isolation. Work and creativity was the sway that Mon also went through:

“When the quarantine started I decided to compose and I sat down every day, I took out the guitar, read, and wanted to do something but no, nothing came out. Like, I felt that I finally had free time and I wanted to take advantage of it but no, I was blocked. To be very honest, I had a super dark moment, I had my appointments with my psychiatrist by video call and I took sleeping pills, waking pills, pills for everything, like a zombie. Until a moment came when I agreed to do nothing and began to relax a lot. When I understood that this was a new life that I had to accept, embrace and that it will not be short (I do not know how long this will last), I hugged it and kind of relaxed. I started to enjoy other things.”

“Se Me Va a Quemar El Corazón is actually the first song in the album. The entire writing process was very solitary, bleak and melancholic, because I was like everyone else, just filled with uncertainty about what was going to happen. So I clung onto my music and my guitar because I thought, if the world ends, I at least want people to know how I was feeling. I wanted to sing about personal experiences, past and future loves, the love I have for my mom and other women. It’s an album filled with honesty. During that time, I had nothing else to do but write and sing. I’ve learned that we live life as if we’re in a hurry. I don’t have time to stop, observe or breathe. With this album, if I had anything, it was time. I had time to really listen to the songs, to rewrite, and that’s something I could never do. For example, the song with Gloria Trevi, “La Mujer,” it’s a song I wrote years ago but stopped performing it because I didn’t like the lyrics anymore. They were toxic. I allowed myself to revisit this song for the album because I had time.” 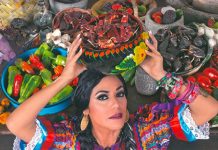 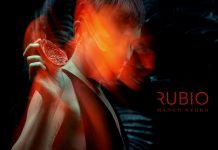