The album title, Between Two Worlds, could not fit any better for Amaru Tribe, a trio of Latin Americans who have long called Australia home. Hailing originally from Colombia and Chile, the group’s ethos is shaped by Latin America, heard in the echoes of cumbia and the gaita flutes and tambora hand drums that enliven the music, and in the passion for their homelands; but Australia, and the Asia-Pacific region as a whole, has had a huge impact: there’s phin guitar and collaborations with Thai musicians; yidaki (known as didgeridoo) instrument from Australia; and there’s the more contemporary sounds redolent of Australia’s nu-disco and dance music scenes. Throughout the album, their sound oscillates between these two worlds, never completely part of one or the other, constantly evolving and creating something new.

“We are a dual identity project, our motherland is Latin America, and we are based in Australia. We are constantly existing in these two worlds that are essential for us. Amaru Tribe allows us to exist peacefully with this, it allows us to make beauty out of this contradiction of identities, to create something new. We have been living in Australia for many years so we do consider it a second home, we’ve definitely changed here, but the Latin roots are so strong for us. Amaru Tribe is those two worlds, and that limbo that immigrants live in.” KATHERINE, AMARU TRIBE

Between Two Worlds begins with “La Tormenta”, its detached disco synths in the vein of Todd Terje or Cerrone, Latin percussion and yidaki (played by aboriginal musician Stuart Fergie, who sadly passed away in February this year) joining the fold as the groove builds and builds, with the following “Se Prendió” (“The Party Has Started”) breaking the tense rhythm with a chorus that feels like pure catharsis. Following track, “La Serpiente”, is cumbia with a Lady Gaga synth hook, before spiralling off into a tropical vision of Eurythmics future-pop. Then there’s “Párate”, a track with the same intensity as Bomba Estereo’s break-out hit “Fuego”, the group’s Katherine allowing no let-up in her impassioned lead vocals, and a Thai phin guitar motif providing the thrust.

“Candela Viva” is their riff on a classic cumbia which told the story of a town burning to its ground, with an infectious call-and-response chorus. Amaru Tribe keep that chant alive, in fact it’s become a huge part of their life show, but they take the sound to a place between Systema Solar’s tropical soundclashes and Basement Jaxx in mischievous dancehall mode, and give the song new meaning. Discussing the genesis of the song, Oscar says: “you know Melbourne had the longest lockdown in the world? We were in a moment when we just wanted to burn up our frustrations and fears.” This is what “Candela Viva” represents, a chance to cleanse ourselves of the old and begin again, refreshed.

The album finishes with three calmer moments, a Latin-Caribbean lament for a beautiful morning (“Bonita Mañana”), a hypnotic folktronica collaboration with Thai mor lam band Junlaholaan (“Déjame Volar”), notable for a ferocious synth bass line and exquisite vocal harmonies, and the album closer (“Canto A Bachué”), a song tormented by environmental destruction and protests in Colombia, speaking to African and indigenous goddesses for assistance and sanctum.

Between Two Worlds is produced by Oscar, and co-produced by Katherine and Cristian. The artwork for the album and singles, as well as the concepts for their music videos, are designed by Katherine. In regards to the album cover and its use of the jaguar, Katherine says: “The energy on the streets of Latin America are raw, there’s a wildness there, and there’s a wildness in our music also. We want to ignite something in people, so we chose the jaguar because it has that wild power of Latin America.”

“Between Two Worlds marks a new chapter for the project. As much as the world has dramatically changed in the past two years, we have changed; and our art and music are always the truest reflections of the many ways we evolve, re-construct and heal ourselves. Our upcoming album has been so far both an internal and intimate manifestation of a new beginning, a celebration of life and reunion.” 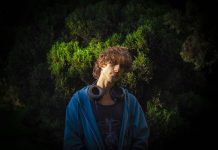 BIOMIGRANT: A NEW ALBUM ABOUT DREAMS, SUN AND SHADOW