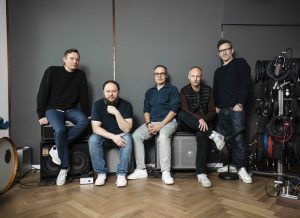 Most artists might find releasing their first album in a decade a bit daunting. But Jazzanova aren’t most artists. Rather, they’re an entity in a constant state of becoming. Right from the very first moment they came together as a group of DJs in 1995, there was no template for what Jazzanova would be, and at every stage they have had to make up the rules as they went along.And so, the ten years between Of All the Things and The Pool passed fast. Jazzanova never slowed down, they never ceased making those musical connections with scenes, other musicians, and fans. OK, during that time, most of the members of Jazzanova did take time to start families, but the nature of the beast was such that the music just kept on coming.

All of which brings us to The Pool. It’s easily Jazzanova’s most complete album. “There’s a lot of influences that are similar throughout,” says Stefan: “the way we use sampling in a particular way, the way we play instruments in the studio, I think it gives it a very coherent sound.” He’s absolutely right: the combination of the tens of thousands of hours of experience on the live stage, in the studio, on the radio and in the club have given the Jazzanova guys an unmistakeable confidence, a solidity to everything they commit to recording, that you can hear in every beat and note. And you can hear that this is a “grown up” record too: there’s much less of the darting from rhythm to rhythm, style to style, that you might hear in their earliest records – everything is about the logic of the individual song. Yet for all that, there is scintillating colour that shifts from minute to minute. As ever there is a great cast of collaborators, and each singer or rapper brings their own flavour to the piece. This is definitely the start of a major new chapter in the endlessly fascinating story of Jazzanova. There’s still no template for what they are, they’re still making up the rules, and that’s precisely what keeps their music so very wonderful.