Everyone needs human touch. We long for contact with our loved ones, we need to feel their skin on ours. If we don’t get enough of that, our skin misses it. This is the theme of Tolstoy’s latest single “Skin Hunger (We Are Human Beings)”.

The song “Skin Hunger (We Are Human Beings)” is the third released one from the upcoming album “Mirror Me”, which the band Tolstoys is preparing with Berlin producers Drew Deale and Zino Mikorey. Musicians spread out between three cities also shot an impressive music video for the song, in which their friends starred in animal masks.
By the editing of the song and video, they refer to the art of natural nations, calling for a return to human nature, fellowship and animalism.

The new song by the band Tolstoys, whose members currently live and work in the cities of Bratislava – Prague – Berlin, is a celebration of humanity and everything that people have in common.

“In the chorus we all sing” We are human beings “. We want to symbolize the strong bond between people and the natural cohesion of the human race. The coldness, reserve and contactlessness of today’s “screen society ” is in contrast to the tribal life natural for the homo sapiens species. We are all human beings, regardless of our race, sexual orientation and other differences, we are a part of one tribe, ”says Ela Tolstová, who appears in the video clip in a tiger and a fox mask.

Musically, the song “Skin Hunger (We Are Human Beings)” has an unleashed and hypnotic effect.

The Tolstoys achieved the unique “tribal sound” by using traditional wooden whistles- the so-called endings and vigorous harmonies. They refer to the coldness and depression of big cities with a bold distortion bass synthesizer in the chorus. A cottage in the Low Tatras, where the song was composed, also played a role- the musicians told scary stories about Goatman – a goat man who lives in the forest and can imitate the voice of every human being.

“It’s influenced by the mysticism, magical realism and the mountains we have been surrounded by, the natural forces that transcend us, and simultaneously the experience of human closeness, which we have recently lacked,” adds Tolstová.

Visual artists Peter Podolský and Tereza Smetanová, students of the Department of Documentary Directing at the Academy of Performing Arts in Bratislava, came up with the idea for the video clip.

“Masks are a visual reference to the art of natural nations, an ancient symbol of human spontaneity and animalism. Just like the lyrics of the song indicate a return to a certain human essence, we wanted to bring closer the situation that communicates this sense of belonging and free spirit when creating the music video”, add the creators of the video who used a digital camera, an analog camera and also a technique called pixilation.

“Skin Hunger (We Are Human Beings)” comes out on September 22 and is a part of the upcoming second album “Mirror Me”, on which the Tolstoys openly admit that they are still looking for their own identity. The cover for the single contains a fingerprint and was designed by the graphic artist Kristýna Kulíková, the photos were taken care of by Samuel Alex Petráš. The album is scheduled for release next year. 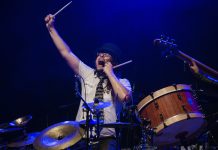 MICHELLE GUREVICH – ECSTASY IN THE SHADOW OF ECSTASY